The exhibition deals with language and the significance of the operative word for the art world. Artsits, curators, artcritics and philosophers have always seen art as connected to the written word. The four Austrian artists that can be seen at the ACF London scrutinise the process of writing very precisely. In their artworks they rearrange, transform and author text.

Eva Beierheimer and Miriam Laussegger have developed a special online interactive project which collects and generates words and text common in art discourse (www.art-words.net). Their work examines the language used by art critics, artists and others working in the cultural fields. They question the importance given to the description or artworks and whether this does or can impede artists whose primary means of expression is something other than works.

In his works Jochen Höller refers to the chaos theory, the systems theory, philosophy and literature and deals with works by notable thinkers, deconstructing texts by Asimov, Marx, Wittgenstein and many more. By rearranging these texts sentence by sentence and word by word, at times even extracting only the punctuation marks, he creates collages generating a new context for the texts and conveying new meanings.

Roman Pfeffer erases text to create his artworks. His work-series refers to an artwork by Robert Rauschenberg from 1953. Rauschenberg asked Willem de Kooning for a drawing and then painstakingly tried to erase it. Erased de Kooning Drawing - the work's title - clearly demonstrates that rubbing out is nothing more than re-drawing an existing image with an eraser. Roman Pfeffer addresses this classic example of destructive appropriation in a continuation of this virulent shift. 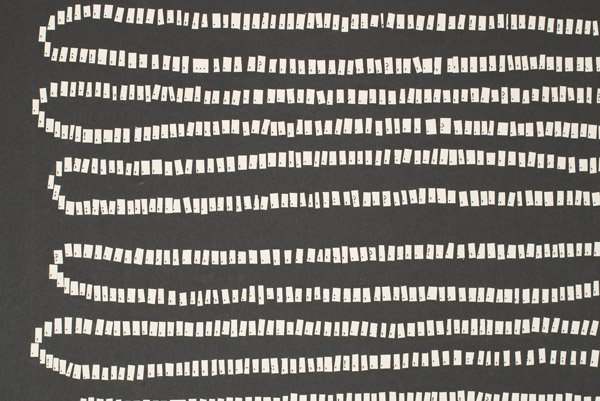