Refuge, The Art of Belonging

Refuge, The Art of Belonging

Refuge: The Art of Belonging tells the story of artists who entered Britain as a result of Nazi occupation.

The exhibition is part of Insiders/Outsiders - a nationwide arts festival taking place throughout 2019 to celebrate refugees from Nazi Europe and their contribution to British culture.

This exhibition particularly focuses on the work of two artists who came to the Lake District during the Second World War: Hilde Goldschmidt (1897-1980), a successful Expressionist artist, and Kurt Schwitters (1887-1948) who is widely recognised as one of the most influential artists of the 20th century.

Schwitter's painted prison guard Edward Driscoll (below) while he was interned as an 'illegal alien' at a prison camp in the Isle of Man in 1941.

Considered by many to be the first multimedia artist, working in paint, collage, poetry and installations, Schwitters was seen by the Nazis to be a 'degenerate' artist. Born in Hannover, Schwitters developed his own style of abstract art which he called Merz. Like most German artists, Schwitters was driven out of Germany by the Nazis, and fled to Ambleside, Cumbria.

Goldschmidt and Schwitters met in the Lake District and inspired each other to continue and grow their practice.

Refuge: The Art of Belonging features two portraits made by Schwitters during his internment on the Isle of Man. The first, of fellow artist Fred Uhlman and the second of Edward Driscoll, a guard at the internment camp which was painted on a panel of a tea chest (on loan from a private collection). These will be shown alongside a portrait of Georg Heller, a fellow internee, painted by Schwitters on a piece of lino pulled from the floor of his room.

The exhibition will also include works by Josef Herman and Oskar Kokoschka, and will feature a selection of loans from both public and private collections around the UK.

French-German artist Jean ‘Hans’ Arp (1886-1966) will also be included. Although Arp fled to Switzerland, he had a resounding effect on British Surrealist art and communicated regularly with his friend Schwitters while he lived in Cumbria.

Alongside the exhibition, Lakeland Arts is commissioning a community project exploring the lives of refugees living in Cumbria. Inspired by Schwitters' paintings and Lakeland Arts’ collection, the work will sit within the show and evolve throughout the course of the exhibition. 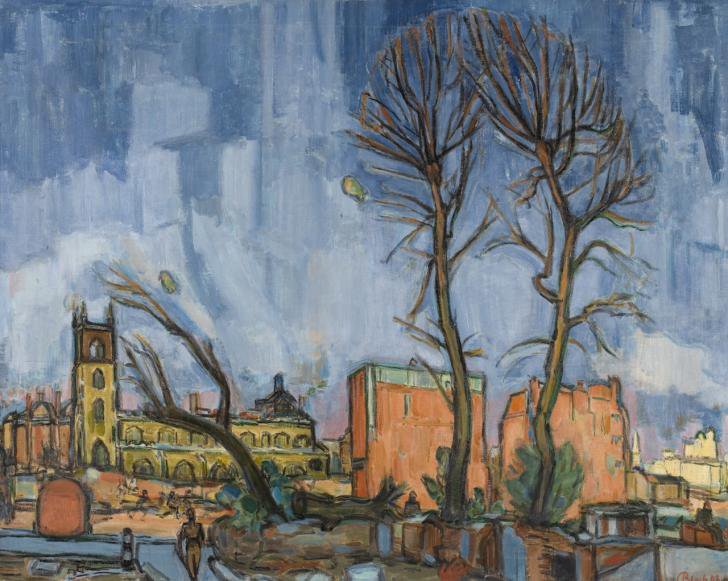