The Vienna Model of Radicalisation. Austria and the Shoah

The Vienna Model of Radicalisation. Austria and the Shoah – Exhibition and Exhibition Talks

This new exhibition, on show for the first time in Britain, explores the significance of the Holocaust in Austria.

Based on recent research, The Vienna Model of Radicalisation: Austria and the Shoah highlights the role of Vienna as gateway for the radicalisation of antisemitic policy in the Nazi State. The “Vienna Model” – a term coined by historian Hans Safrian – entailed the accelerated expropriation and expulsion policy in Austria. In 1941, the Central Office for Jewish Emigration, which had been set up by Adolf Eichmann in 1938, developed an organisational model for deporting the Jewish population to ghettos, extermination camps and killing sites.

1941, the Nazi regime began with the systematic deportation of the Jewish population in Nazi Germany. The first deportation as part of this Reich-wide policy was a transport of 1,000 Jews that left Vienna’s Aspang train station for the Litzmannstadt/Łódź ghetto on 15 October 1941. By October 1942, the deportation of the majority of Austrian Jews was concluded. More than 45,600 persons had been deported in 45 transports in 1941 and 1942. While numerous Austrian Jewish refugees were seized by Nazi authorities in occupied Europe, the majority of the more than 66,000 Austrian Jewish victims of the Shoah was deported from Vienna.

The exhibition reveals Jewish self-help and acts of resistance by courageous individuals. It pays tribute to the UK, the US and other countries, in providing refuge to Jewish refugees. It illuminates the silence around the Holocaust in postwar Austria, a silence the perpetrators benefitted from.

The exhibition emphasizes how Austria remains charged with remembering the Holocaust both now and in the future – and that the fight against antisemitism and racism is as timely as ever.

The Anschluss to Nazi Germany radically changed the lives of the Jewish population. While anti–Jewish measures had progressed in Germany over the course of five years, they were implemented in Austria overnight.

Many Austrian Jews therefore tried to escape the Nazi terror in the months following the Nazi take-over. Between 1938 and 1941, more than 130,000 Jewish Austrians fled the country, while overcoming bureaucratic hurdles and deliberate obstructions. Around 17,000 of them were later on caught by the Nazi regime in their countries of refuge.

At the beginning of 1941, there were still around 61,000 people living in Vienna, who were defined as Jewish under the Nazi Race Laws. The Jewish population was now completely impoverished due to Aryanization measures and deprivation by the Nazi authorities. This lecture will focus on Jewish life under Nazi rule on the eve of deportation, describing the living conditions in the forced collective flats and the welfare institutions of the Jewish Community, who attempted to alleviate the most pressing needs through soup kitchens, health services and other forms of aid.

Michaela Raggam-Blesch is a Senior Research Fellow at the Institute for Contemporary History at the University of Vienna, where she is working on her habilitation on “Mixed Families” during the Nazi period in Vienna, funded by the Elise Richter grant (Austrian Science Fund) and the Fondation pour la Mémoire de la Shoah (Paris). She is guest lecturer at the Universities of Vienna, Klagenfurt and Graz, and from 1999 to 2003 she worked at the Leo Baeck Institute in New York. She has been the recipient of various fellowships and was awarded with the Leon Zelman Prize in 2022. Michaela Raggam-Blesch is curator of several exhibitions on the Holocaust – most recently of the exhibit on the Vienna Model of Radicalization: Austria and the Shoah.

Hybrid Exhibition talk: Kristallnacht in Vienna: The Radicalisation of Antisemitic Policy in the Nazi State

In this talk, Dr Toby Simpson will discuss the reasons behind the extreme brutality of Kristallnacht in Vienna.

Compared to other locations in the Third Reich, even in other cities where local antisemitism was rife, the brutal nature and long-term impact of anti-Jewish violence in the Austrian capital is striking.

This talk will examine collections held at The Wiener Holocaust Library and consider what insights the study of this terrible historical event might offer people today.

Dr Toby Simpson is Director of The Wiener Holocaust Library, the world’s oldest archival and library collection relating to the Holocaust and Nazi era. He has been in his current role since 2019.

Previously he led the project Testifying to the Truth: Eyewitnesses to the Holocaust which has catalogued, digitised, and translated over 1,000 eyewitness accounts, gathered by the Wiener Library between 1954 and 1961.

Dr Simpson joined the Wiener Library in 2011, setting up a new programme of exhibitions, tours, and events. Between 2011 and 2016, he curated or co-curated over a dozen exhibitions including Humanity After the Holocaust: The Jewish Relief Unit, 1943-1950, and Four Thousand Lives: The Kitchener Camp Rescue. 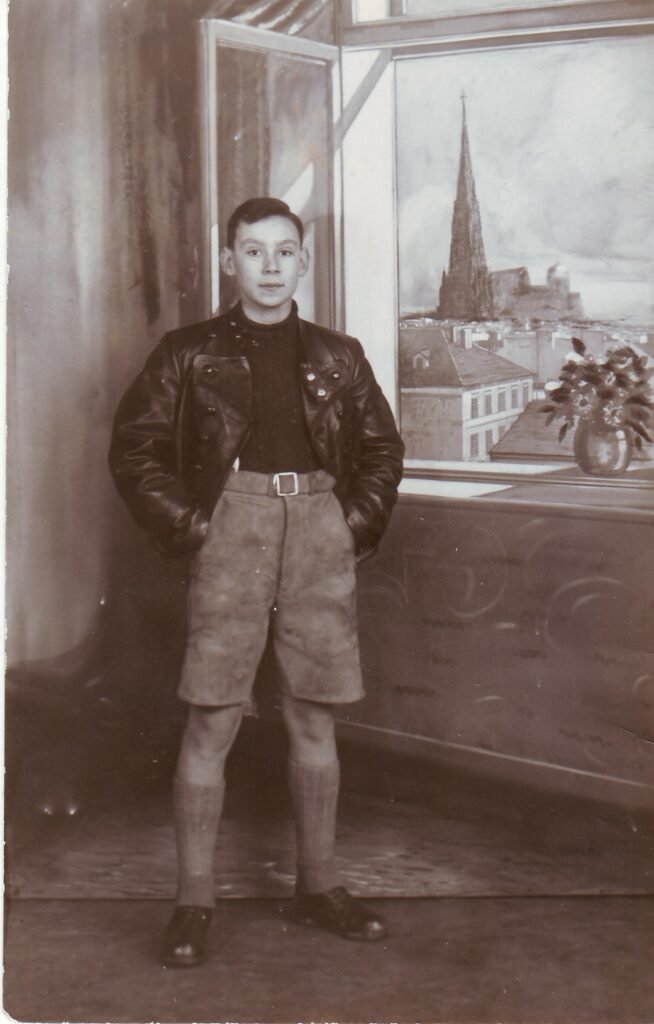 Farewell photo with an inscription by Maxi Reich (1928–1941/42) written three days before his deportation. Together with his parents Irma and Jakob Reich, Maxi was deported to Modliborzyce on 5 March 1941© Private collection of Martin Vogel