To celebrate the European Year of Cultural Heritage and to mark Austria’s Presidency of the Council of the European Union, the Austrian Cultural Forum London in collaboration with the Representation of the European Commission in the UK and EUNIC (European Union National Institutes of Culture) presents Another Europe, an outdoor exhibition of photographs, around the Kings Cross area of London, exploring the diversity of European Heritage.

Another Europe features 28 photographs, one from each EU Member-State, mounted on specially designed concrete benches dispersed around London’s King’s Cross area. The photographers represent a wide range of photographic practices and are a mixture of established and emerging talents. Together they voice themes and influences we all recognise as part of our cultural heritage from concrete manifestations such as monuments, buildings and sites to the more ephemeral social aspects such as childhood, fairytales; theatre, landscape, conflict, work, celebration, family, memories, literature and traditions.

Images of NATO observation towers by Belgian photographer Els van den Meersch contrast with those of a wedding ceremony in Greece by George Tatakis, Petra Lajdova’s striking portrait of a woman in traditional Slovakian clothing, Marketa Luskacova’s Czech carnival scenes or the installation of a Jeff Koons sculpture at Amsterdam’s Stedelijk Museum by Henk Wildschut. Italian photographer Massimo Vitali, famous for his heat-infused Mediterranean beach scenes, has photographed the Rome Forum while Simon Roberts (UK) brings us a very British beach scene of the Charles Dickens celebration at Broadstairs

Curated by UK artist Hamish Park, the exhibiting artists are in full:

The project is coordinated in partnership with the Representation of the European Commission in the UK, Argent Property Development and Atelier Jungwirth in Austria.

Austria: Klaus Pichler (b.1977) lives and works in Vienna, Austria. Since 2005 he has been creating free photo projects on a range of diverse topics, inspired by the hidden aspects of everyday life. The series ‘Middle Class Utopia’ is a portrait of the strange world and the inhabitants of the garden colonies in and around Vienna, called ‘Schrebergärten’.

Belgium, Flanders: Els van den Meersch (b. 1970). A constant subject through all her works is the relationship between architecture, politics and identity with heritage. She investigates the connection of architecture with (unrecorded) history, politics and its effects on identity. She has participated in several group exhibitions and held solo exhibitions around the world.

Bulgaria: Emil Danailov is a travel photographer and journalist, formerly editor-in-chief of Odysseus – once the most popular Bulgarian travel and adventure magazine. His works have been shown in numerous exhibitions, and he shares his experience in travel photography workshops.

Croatia: Jelena Blagović (b. 1983) received a BA and MA from the University of Westminster, London. She won the David Faddy Scholarship for academic excellence and Best Young Artist in 2014 from the Croatian Association of Artists of Applied Arts. Her work was exhibited at numerous solo and group exhibitions in France, England, Italy, Germany, China, Croatia, etc.

Cyprus: Thodoris Tzalavras (b. 1978) lives and works in Nicosia, Cyprus. Along with writer Ioanna Mavrou, he released the monograph Nicosia in Dark and White. It deals with the abandoned buildings adjacent to the so called Green Line in Nicosia, the capital of Cyprus.

Czech Republic: Marketa Luskacova (born 1944) is considered one of the best Czech social photographers to date, with numerous solo and group exhibitions since 1969. She has photographed and documented the life of children in Britain, the Czech Republic, Slovakia, and Poland.

Denmark: Astrid Kruse Jensen (b. 1975) is a photography-based visual artist. She studied at The Gerrit Rietveld Academie in the Netherlands and The Glasgow School of Art. She has had solo exhibitions in Denmark, France, Germany, Holland, India and several group exhibitions in Europe, USA, Canada, Russia and China. Recently she received the Anne Marie Telmányi's honors award for female artists in Denmark.

Estonia: Birgit Püve (b. 1978) lives and works in Talinn, Estonia. Won third place at The Taylor Wessing Prize in 2014 and was named the Spectrum Emerging Talent 2012 by the picture editors of The Sunday Times Magazine and Spectrum.

Finland: Nina Korhonen (b. 1961) lives and works in Stockholm. Since 1990 she has enjoyed various worldwide exhibitions and published award winning books. She holds workshops and teaches in art- and photo schools around Europe. In her book Minne.Muisto.Memory Nina Kohronen recalls her childhood summers and her relations to animals and nature and of growing up.

France: Marlot-Chopard Ariane Chopard-Guillaumotare (b. 1974) and Rémy Marlot (b. 1972) are a French artist duo working with photography and video since 1996, known under the name of Rémy Marlot until 2012. Their work questions natural or urban landscape and architectural heritage, but is also about dreaming and the atmosphere the night can provide.

Germany: Andreas Trogisch (b. 1959) lives and works as graphic designer and photographer in Berlin. He has exhibited in Lyon, Berlin and Köln and his work was featured in several photobooks. Since 2015 he is a member of the “Deutsche Fotografische Akademie”. His work ‘Gas Tank’ shows what used to be Europe’s largest bricked gas tank, which was blown up in 1984 despite heavy protests.

Greece: George Tatakis (b. 1981) has been published internationally, including National Geographic and partnered with brands such as Leica, Canon, Huawei, UNESCO and more. The purpose of his images is to capture the moment and not just to show what is happening visually. He focuses on documenting social events and interactions of people, whose individuality and spontaneity separates them from one another.

Hungary: Tamas Dezso (b. 1978) has been documenting rapidly disappearing worlds in both his native Hungary and neighbouring Romania since 2009. He has enjoyed solo exhibitions across the USA, UK, Europe, Australia and China.

Ireland: Gerry Balfe Smyth lives and works in Dublin, Ireland. He is inspired by ‘real people’ giving a voice to those on the margins, exploring social and cultural themes, in particular groups of people that share a common identity.

Italy: Massimo Vitali (b. 1944) started working as a photojournalist in the early 1960s, collaborating with many magazines and agencies in Italy and in Europe. His famous series of Italian beach panoramas began in 1995 in the light of drastic political changes in Italy.

Latvia: Iveta Vaivode (b. 1979) began her photographic career as a fashion photographer before graduating from Bournemouth Art Institute (UK) in 2008. Her photographs have been exhibited in Latvia, Lithuania, U.K., France, China and Belgium.

Lithuania: Romualdas Požerskis (b. 1951) is a recipient of the Lithuanian National Prize (1990). His work has been featured at solo and group exhibitions around the world.

Luxembourg: Jean Back (b. 1953) is writer, photographer and civil servant in a Luxembourg. His novel Amateur won the EU Prize for Literature.

Malta: Joanna Demarco is a photographer and writer interested in exploring social issues within her home country. Her work has been exhibited in London, Berlin, Austria and Switzerland.

Netherlands: Henk Wildschut (b. 1967) studied photography at the Royal Academy of Art in The Hague. His work is exhibited around the world. In 2005 he started a long term project around European illegal immigration which resulted in the books ‘Shelter’ (2010), awarded the Dutch doc Award, and ‘Ville de Calais’ (2017), awarded the Arles, Prix du Livre.

Poland: Adam Panczuk (b. 1978) lives in Warsaw. His unique skill to tell gripping yet intimate stories with images has won him many prestigious awards to date.

Portugal: Paulo Catrica (Lisbon, 1965) was awarded a PhD at the School of Art and Media, University of Westminster (London, 2011). His photographs have been exhibited and published regularly since 1997 and are part of public and private collections in Portugal, Spain, Finland, United Kingdom, France, Germany, Brazil and Canada.

Romania: Oana Stoian (b. 1993) was selected for the Professional shortlist in the Staged category at the Sony World Photography Awards in 2016.

Slovenia: Andrej Tarfila (b. 1978) lives and works in Selca, Slovenia. He aims to preserve special moments in which he can find and expose hidden messages, invisible to the eyes of ordinary observers. His photograph ‘Church on the fields of Sorško polje’  won the Slovenian National Award of the 2016 Sony World Photography Awards.

Spain: Alvaro Deprit (b. 1977) dedicated himself to investigate social topics to create very personal photographs. However, rather than planning on stories he lets himself be guided by circumstances. His work has been exhibited in festivals and galleries in Arles, Rome, Barcelona, Madrid, London and New York. Winner of the British Journal of Photography Award among others and finalist in the Voices Of Arles, Leica Oskar Barnack Award and Sony Award.

Sweden: Jeanette Hägglund (b. 1963) is based in Uppsala and has worked in the industry for 12 years across advertising and portraiture.

United Kingdom: Simon Roberts (b.1974) is based in Brighton, UK. His approach is one of creating wide-ranging surveys of our time, which communicate on important social, economic and political issues. In 2012 he was granted access by the International Olympic Committee to photograph the London Olympics.

With the support of: 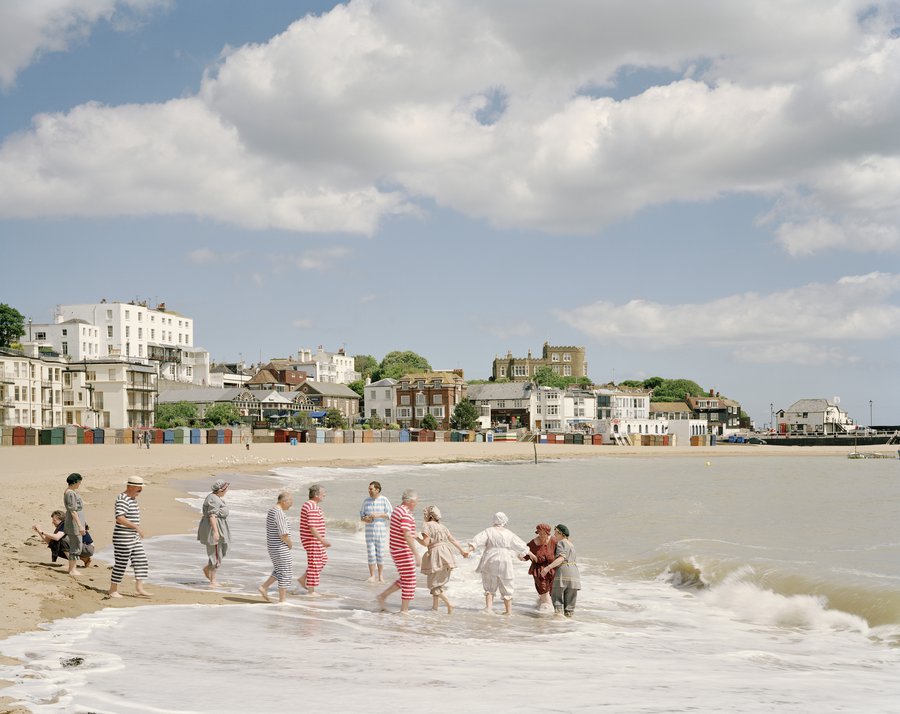