** We regret to inform you that due to illess, this event has been postponed until further notice. We are already working on an alternative date and will update you as soon as it is confirmed. **

We are delighted to welcome the renowned Austrian violist Herbert Kefer, founder of the prestigious Artis-Quartett, together with top-pianist Markus Schirmer for an evening recital at the ACF London.

Both musicians are currently working on a recording of Röntgen’s viola sonatas, which will be published with the British label NIMBUS in early 2023.

Röntgen studied piano in Munich with Franz Lachner, a pupil of Franz Schubert, whose Sonata for Arpeggione will end the evening programme. As a pianist, Röntgen - amongst others - was working with Brahms, Flesch and Casals. Since he had settled in Amsterdam, he became one of the founders of the famous philharmonic Concertgebouw building, as well as a teacher for harmony and composition at the conservatory. In 1930 Röntgen received an honorary doctorate from the University of Edinburgh, where his friend Donald Francis Tovey was professor, who later described him as ‘one of the greatest masters of absolute music I have ever known’.

Herbert Kefer was born in Eisenerz, Austria, in 1960. At the age of five he received his first musical education on the violin. He continued his studies with Prof. Karl Frischenschlager in Leoben and with Prof. Karl Stierhof at the University of Music in Vienna. In 1986 he graduated with distinction.
In 1980 he founded, together with three colleagues, the Artis-Quartett. From 1984 to 1985 they spent one year in Cincinnati/Ohio with the LaSalle-Quartet to profit from their knowledge as much as possible. After that, an international career including concerts at all well known festivals began (‘Salzburger Festspiele’, ‘Schubertiade Feldkirch’, ‘Wiener Festwochen’, ‘Casals Festival’ to name a few). The quartet has made more than thirty recordings, some of which have been honoured with the Grand Prix du Disque and the Diapason d´Or.
In 1991 Herbert Kefer was appointed to head of Viola at the University of Music in Graz / Institution Oberschuetzen. From 2005-2010 he was director of the Weinklang-Festival. He is in demand as a soloist as well as a sought after partner for chamber music groups.

Markus Schirmer is a professor at the University of Music and Performing Arts, Graz, where he teaches concert piano. He was awarded the Music Manual Award at the international Music Convention EUROMUSIC and one of Austria’s most prestigious awards, the Karl Böhm Interpretation Prize.
No matter where he tours he receives audience acclaim for his charismatic musicianship and his ability to tell vivid stories with the instrument. One of his reviews sums him up precisely: “A pied piper on the piano…music that comes straight from the heart, the brain and the fingertips.”
Soon he was to take most of the prominent concert halls and festivals by storm, such as Wiener Musikverein, Suntory Hall/Tokyo, Wigmore Hall/London, or Philharmonie/Berlin and many more.
He has worked with numerous renowned orchestras, like the Vienna Philharmonic Orchestra, Royal Philharmonic Orchestra London or Tokyo Symphony – just to name a few.
His love affair with the unusual, his daring and his eagerness to explore new territories ensure the development of sensational events outside the traditional classical repertoire.
In addition to his work as a very successful Professor of Piano, Schirmer regularly gives international masterclasses for piano and is a sought after adjudicator at several prestigious piano competitions. Furthermore, he is the artistic director of the international music festival ARSONORE at the Hall of Planets in Eggenberg Castle (UNESCO World Cultural Heritage) in Graz/Austria. 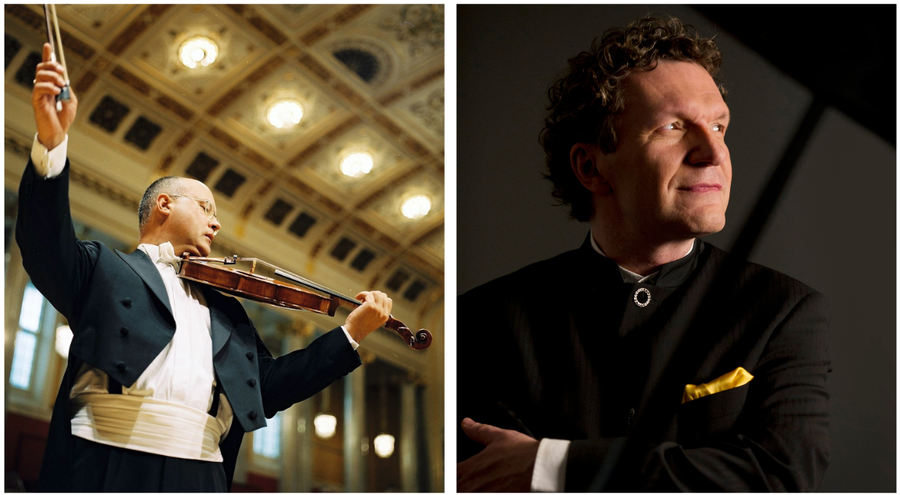