In his two short stories Leutnant Gustl (1901) and Fräulein Else (1924), Arthur Schnitzler lets the reader enter the minds of his two main characters. The internal monologue takes the reader through one peculiar evening for Gustl and Else.

Leutnant Gustl is at the opera, hoping the performance will end soon. His mind wanders, he distracts himself by looking at the women in the room. Which one will enjoy his company tonight? In the cloakroom Gustl has an argument with another man, who turns out to be the baker from his favourite Kaffeehaus. He calls Gustl a “dummer Bub”. Gustl is enraged and deeply embarrassed about his honour being insulted in such a way. He cannot let this rest – in fact, he cannot continue living. He decides to take his own life, tomorrow at 7 o’clock.

The reader follows this rather unlikable young man as he justifies his decision during a whole night. He believes his status as a military man should earn him respect, thus making the insult by this “insignificant” man particularly shameful.

Fräulein Else T., is the young and beautiful daughter of a prominent lawyer in Vienna. She could enjoy a life of privilege and luxury. Unfortunately, her father has borrowed money very carelessly to fuel his gambling addiction, and now owes 30.000 Gulden to be paid back in exactly three days – if he wants to avoid a prison sentence. While enjoying a holiday in San Martino di Castrozza with her aunt and cousin, Else receives a letter from her mother begging her to ask Herr von Dorsday – an old friend of her father’s – for the money. Else is now faced with a challenge: should she ask for the money – making her embarrassed and uncomfortable – or should she ignore her mother’s letter, leaving her father to deal with the consequences of his own actions?

While both stories are short and the action only takes place over the span of one evening, the internal monologue helps the reader grasp the concerns and motivations of the characters. Schnitzler truly captures the fascinating way in which we think, jumping from one topic to another, reminiscing about old memories, and sometimes convincing ourselves to follow a course of action. On the one hand, Gustl becomes more serious as the night goes on, believing suicide to be his only rational solution and making his peace with it. Else, on the other hand, seems to entangle herself in a net of indecisiveness and irrational ideas of which she cannot escape, leading to an indeterminate ending. Although the novels are light-hearted, Schnitzler addresses topics such as antisemitism, the view on women, the outdated self-image of the military in Austria-Hungary and makes a poignant critique of the bourgeoisie.

Arthur Schnitzler was born in 1862 in Vienna. He studied medicine but later developped a profound interest in literature. He was part of the group “Young Vienna”, formed in 1891. He tackled topics like antisemitism and sexuality, making his works subject to criticism and censorship. His works include theatre plays, novels, short stories and diaries. Schnitzler died in 1931 in Vienna and remains one of the most important Austrian writers to this day. 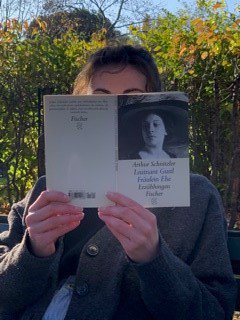